The general problem of query answering over an instance with a set of existential rules is undecidable DBLP:journals/jair/CaliGK13.

There are known three classes of rules for which the problem of conjunctive query answering is decidable. 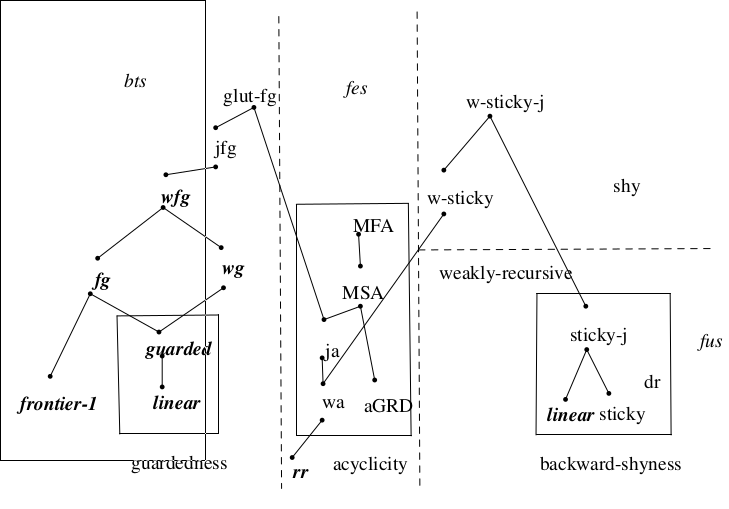 In this case, there always exists an finite canonical model of any facts and the rules we consider, which can be computed using the core chase and on which we can evaluate the query to get the answers.

The FES property is undecidable for general existential rules.

For the guarded fragment, we know that the termination of the oblivious and the semi-oblivious chase is decidable grecoChaseTerminationConstraints2010, which is not sufficient to obtain the decidability of the FES property.

In this case, the rules are such that from any facts, there exists a bound such that any derived facts using the core chase have a treewidth lower than this bound.

A Datalog rule set is FUS if and only if it is bounded DBLP:journals/jcss/AjtaiG94.

An algorithm of query rewriting with rules have been presented in the thesis of Mélanie König: DBLP:phd/hal/Konig14.

With TGDs only, the chase can either terminate or run forever.

As explained in DBLP:journals/pvldb/CalauttiGMT16, we have the following classes \(CT^{c}_{\forall}\) (resp. \(CT^{c}_{\exists}\)) of sets of TGDs \(\Sigma\) such that the chase terminates on all every database, on every (resp. at least on one) c chase executions.

Example of TGD set where there exists a std chase executions that terminates and some that doesn't:

For the oblivious chase: